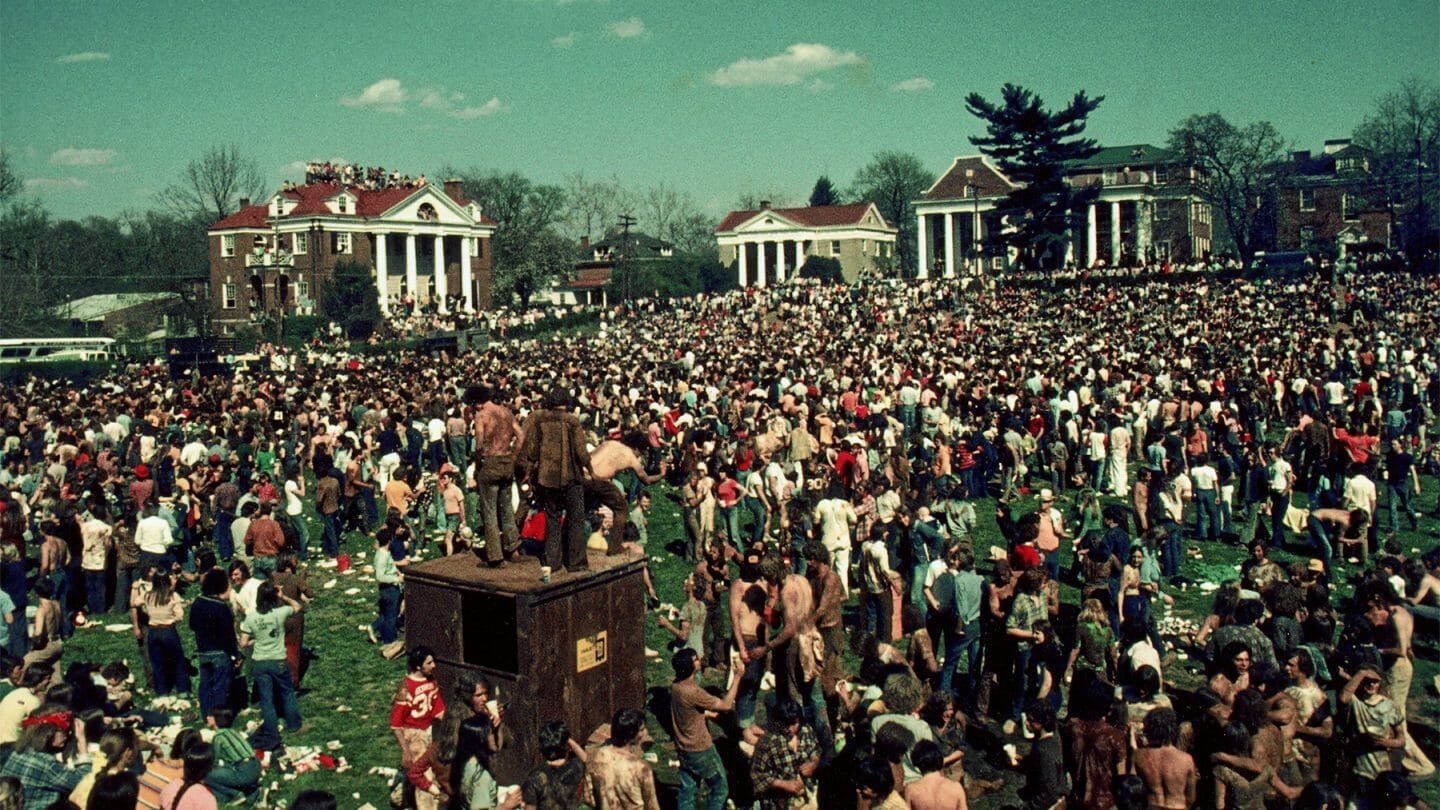 Photographer Ed Roseberry took this photograph of the University of Virginia “Easters” Party on Sunday afternoon, April 11, 1976, when an estimated 15,000 people piled into “Mad Bowl” near the fraternities. UVA’s “Easters” has been called the biggest college party in America in the 20th century. The springtime tradition had its origins as a formal evening of dancing in the late 1880s. Over the course of the ensuing decades, “Easters” evolved into a multi-day series of parties, dances and music concerts that drew an increasing number of young people from up and down the east coast. Owing to safety concerns and the changing times, the University canceled “Easters” altogether in 1982.

Founded in the Spring of 1940 to coordinate the work of local history enthusiasts here in Central Virginia, the founders of our organization were motivated to discover and preserve important historic documents, as well as to conduct original research and to share their findings. The information below, with highlights of our story, has been excerpted and adapted in part from an article that first appeared in the 2015 edition of the Magazine of Albemarle County History, on the occasion of the 75th anniversary of our founding.

In retrospect, it is most surprising that a local historical society was not formed in the area until 1940, though the idea had been circulating as early as February 7, 1829, when the editor of the local newspaper the Virginia Advocate, printed a letter signed only “P.Q.” of Albemarle, urging that a historical society be formed in the county. Though there were lyceum groups, library associations, and music clubs in Charlottesville and Albemarle County, not to mention the many literary, oratorical and scholarly societies at the University of Virginia, there was no organization devoted exclusively to the history of Central Virginia.

It was not until many years later that P.Q.’s suggestion finally began to take shape. During an informal meeting in the office of the University of Virginia Archives at Alderman Library (which had only opened two years before), Lester J. Cappon, Glenn Curtis Smith and Mary Hamilton explored the proposal for establishing a historical society. Cappon was then the Archivist of the University and later served as Director of the Institute of Early American History. Smith was working at Alderman with the archives of historic newspapers and was later a professor at Madison College (now James Madison University) in Harrisonburg. Hamilton was then serving as secretary to the Director of Rare Books and Manuscripts Division in Alderman Library.

On February 23, 1940, Cappon hosted a second organizational meeting in his office, this time joined by a larger group of like-minded supporters which included University Librarian Harry Clemons, who had led the effort to build Alderman Library and modernize the University’s holdings. It was at that second meeting that the idea of a regularly published Society magazine was discussed— underscoring the priority these founding members placed on scholarly research. The group also agreed that their work should include the gathering of historic manuscripts, to be preserved as a unique collection at the University of Virginia Library. Hamilton, who took the minutes of that meeting, also noted, “Everyone agreed that the more publicity the Society could get the better.”

Just a few weeks later, on Thursday evening, April 4, 1940, the much-anticipated founders’ meeting convened at the Albemarle County Courthouse. Close to two hundred people turned out that night in support. Virginia State Senator John S. Battle (later Governor from 1950-54) delivered a welcoming address. University Archivist Lester Cappon formally presented the proposal of a research-based group that would dedicate itself to learning more about the history of Albemarle County and Charlottesville, and to sharing what they learned with an interested public. Those present heartily supported the idea, and the Albemarle County Historical Society was created. Only a year later, the group released its first publication, The Papers of the Albemarle County Historical Society, one of the finest and most well-respected historical society magazines in the nation. It continues to be published annually to this day.

It was not until October 1, 1967, that the Historical Society acquired its first footprint, a historic building at 220 Court Square in downtown Charlottesville. Built in the first part of the 19th century, the site had once been home to John Yergain, a local saddle maker and eccentric, who died in 1837. The modest brick building would be the Society’s headquarters until 1994. Referred to as “the Museum,” it housed the historic exhibit of a re-created lawyer’s office. During this period, to facilitate the ownership and management of the property, the organization became a non-profit corporation for the first time. After much work by volunteers, the Society unveiled for the first time a local history research library in the basement of the building on October 29, 1974— the beginning of what would become one of the best historical research libraries in Virginia.

In 1984, architectural historian Melinda Frierson was hired as the Historical Society’s first Executive Director. Her tenure, which lasted over a decade, represented the beginning of an exciting new era for the organization. In collaboration with the Board and a dedicated network of volunteers, Melinda led the effort in 1994 to move the Society’s headquarters to the historic McIntire Library building on Second Street. The new home offered new opportunities for the growing organization: a bigger library, a large new exhibit hall, office space, and room for archival collections. Throughout the 1980s and 90s the Society was in the vanguard of exciting, progressive exhibits, public events, new tours, and published research exploring the Civil Rights Movement in Charlottesville, the controversial destruction of the African-American neighborhood on Vinegar Hill, the history of the Jewish community, and the story of Greek and Irish immigration to Charlottesville. The Society led by example, demonstrating a firm commitment to an inclusive, comprehensive approach to the history of the region. In 2002, the name of the Society, after years of debate, officially became the Albemarle Charlottesville Historical Society— setting the stage for new growth and potential in the 21st century.

Since our founding eight decades ago, we have grown and changed in a variety of ways to encompass new programs and exciting projects. We are a historical society reimagining and reinventing our role in the twenty-first century. We are a research library and a scholarly magazine. We are a museum of history and culture. We are walking tours and online programs. We are a one-of-a-kind archive of historic papers, photographs, artwork, and memorabilia. We are a strong civic organization dedicated to research, learning, and sharing. We are here for all who want to learn more about the diversity of our community’s history, to discover our shared experiences, and to promote a greater understanding of our past.

Our vision is to reimagine and reinvent the role of the historical society in the twenty-first century: to be a strong civic organization that embraces, in all that we do, the diversity of our community’s history and experience, and promotes a greater understanding of our past, to enlighten the present and foster an inclusive history for future generations.

History is not the past; it is the story we tell about the past. Every person in Albemarle County and the City of Charlottesville has a unique and powerful story to tell. Through collecting, preserving, and interpreting the history of our community, we are committed to informing, inspiring, and bringing together all people, creating opportunities for new relationships and new understandings.

Our work is grounded in a belief in the worth and dignity of every human being. We respect people, communities, and cultures. We value discovery, creativity, integrity, and diversity. We believe in the potential for history to enrich our lives and to create stronger relationships and more vibrant communities. We approach our work with integrity and transparency.