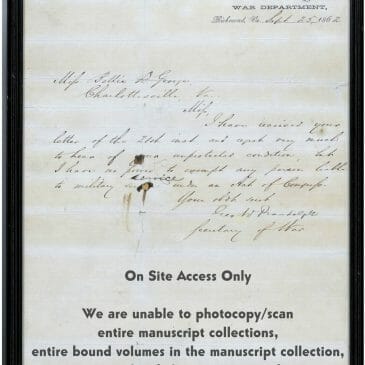 George Wythe Randolph (1818-1867) was the grandson of Thomas Jefferson. He was born at Monticello in Albemarle County, Virginia. He practiced law in Charlottesville and lived at Edgehill. He moved to Richmond around 1851 where he continued to practice law. He represented Richmond at the Virginia Secession Convention in 1861. Confederate President Jefferson Davis appointed Randolph Secretary of War in 1862. In 1864 he ran the U.S. naval blockade and took his family to Europe where he received medical treatment for tuberculosis. He returned to Albemarle County and died at Edgehill in 1867. He was buried in the Jefferson family graveyard at Monticello.

This collection contains an ALS from George W. Randolph, Secretary of War of the Confederate States of America, to Miss Bettie D. George of Charlottesville, Virginia, 25 September 1862. Randolph regrets Miss George’s unprotected condition, but has no power to exempt anyone from military service.

Also included is an ALS from the Albemarle County Historical Society to the donor, 28 October 1984.