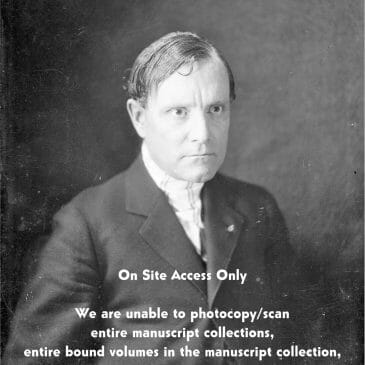 Biographical/Historical Information: John Armstrong Chaloner (born Chanler, 1862-1935) was the oldest child of Margaret Astor Ward and John Winthrop Chanler and was related to the Astor, Livingston, and Stuyvesant families of New York. He married Amélie Rives of "Castle Hill" in Albemarle County, Virginia in 1888, though the marriage was unhappy and Rives divorced him in 1895. He purchased "Merry Mills" in Albemarle County, Virginia. Chaloner founded Roanoke Rapids, North Carolina, where he operated a successful cotton mill. Due to his increasing erratic behavior, in 1897 his family in New York had him declared insane and committed him to the Bloomingdale Insane Asylum in White Plains, New York. Four years later he escaped the asylum and took refuge at "Merry Mills." He was later declared sane in Virginia and North Carolina courts. He lived the rest of his life at "Merry Mills." Chaloner died in Charlottesville, Virginia on June 1, 1935.

(1) a photocopy of stenographer’s minutes in the above mentioned case;

(2) a pre-printed appeal to the State of North Carolina;

(3) a petition to the President of the United States, signed by Albemarle County, Virginia citizens;

[Portrait of J.A. Chaloner by Rufus Holsinger, 1918, in the University of Virginia Special Collections.]