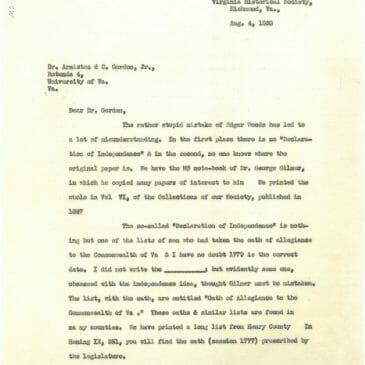 Acquisition Information: Gift of University of Virginia Library, 26 May 1976.

Biographical/Historical Information: On 28 June 1777 the General Assembly passed “An Act to oblige the free male inhabitants of this state above a certain age to give assurance of allegiance to the same and for other purposes,” and the House of Delegates directed that the public printer print, without delay, one copy of the Act for each magistrate within the commonwealth, together with a sufficient number of certificates, and send the same to the several counties. The Act provided that all free-born male inhabitants above the age of sixteen, except imported servants, were to subscribe to the oath on or before 10 October 1777 before the justices of the peace in their counties, boroughs, or cities and that the justices of the peace were to keep fair registers of the names of such persons; and before the first of January in every year following, to submit to the clerk of the court for the county a list of the persons who had signed. Upon signing, each person was to receive a certificate which read: “I do hereby certify, that   hath taken and subscribed the oath or affirmation of allegiance and fidelity‥‥ Witness my hand and seal this day of .” The presence of a copy of the oath of allegiance and of the names of the signers in George Gilmer’s Diary (the original MS has not been found) seems to indicate that George Gilmer was the justice of the peace charged with taking the oaths and keeping a record of the signers. From the last entries it appears that the record was cumulative through April 1779. Gilmer was a justice of the peace in Albemarle county, 12 June 1771 (“Justices of the Peace of Colonial Virginia,” Va. State Libr., Bull., xiv [1921], 109). [text from Founders Online, “Oath of Allegiance Signed by Citizens of Albemarle County, [1777],” Founders Online, National Archives, https://founders.archives.gov/documents/Jefferson/01-02-02-0042. [Original source: The Papers of Thomas Jefferson, vol. 2, 1777 – 18 June 1779, ed. Julian P. Boyd. Princeton: Princeton University Press, 1950, pp. 128–130.]].

Scope and Content: This collection consists of photocopies of Virginia Magazine of History and Biography articles about the Oath of Allegiance, along with a photocopy of the name of the men who signed it. Also included is a typed letter from WG Stanard of the Virginia Historical Society to Dr. Armistead C. Gordon, Jr. of the University of Virginia, 4 August 1930, indicating that no one knows where the original document is located.