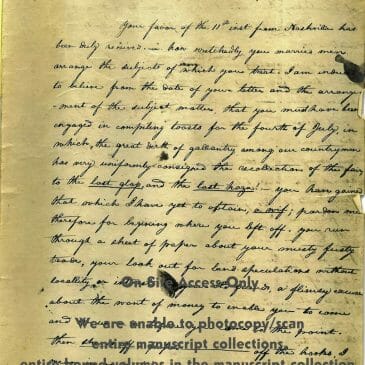 Biographical/Historical Information: Meriwether Lewis (1774-1809) was born in Albemarle County, Virginia at the Locust Hill Plantation near present-day Ivy. After the death of his father William Lewis, his mother Lucy Meriwether remarried to John Marks, and the family moved to Georgia. Lewis was sent back to Virginia at the age of 13 to continue his education with private tutors. President Thomas Jefferson appointed Lewis Secretary to the President in 1801. Jefferson chose Lewis to lead the expedition, along with William Clark, to explore the newly-acquired Louisiana Territory. After Lewis' return, Jefferson appointed him governor of the Louisiana Territory, and Lewis settled in St. Louis. On a journey from New Orleans to Washington to see Jefferson in 1809, Lewis died, under mysterious circumstances, in Natchez Trace, Tennessee.

Scope and Content: This is a photocopy of an ALS from Meriwether Lewis to Major William Preston, St. Louis, 25 July 1808, discussing marriages, naming a surveyor, government agents, and the advantages of making a livelihood in the Louisiana Territory. Original letter is in the Filson Historical Society, Louisville, Kentucky.