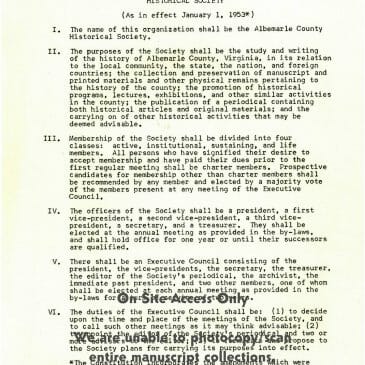 This collection contains records and correspondence relating to the activities of the Albemarle County Historical Society from 1953 to 1959. The largest subfolder contains materials on the Michie Tavern controversy.

Folder B: Meetings of ACHS, 3 items

(1) Photocopy of typescript memo – Communication from ACHS to Societies, Clubs, and Associations interested in the cultural assets of Charlottesville and Albemarle County, 5 January 1954, signed by Bernard Chamberlain, President. Appended is the report of the Committee for Preservation of Antiquities in Charlottesville, written by Evelina Magruder, chairman of this ACHS committee. 6p.
(2) Typescript giving the wording of plaques to be placed on historic buildings and a list of other buildings of architectural significance, circa 1954. 7p.
(3) Typescript similar to item 2 but with some changes in wording and comments. 8p.

Folder G: James Monroe Portrait, 1 item – Onionskin memo from Milton Grigg, President to Floyd E. Johnson, Miss Anna Barringer and Mrs. Gordon Lindsay, 9 May 1956, naming them as a committee to work with a committee from the Bar Association to secure a portrait of James Monroe for the courthouse.

Folder H: Michie Tavern Controversy – ACHS contends that the tavern was not the boyhood homer of Patrick Henry, nor built by his father and the tavern should stop using these statements in their advertising.

Architectural plans drawn by Alden Hopkins, April 1959, for landscaping the Albemarle County Courthouse, Charlottesville, Va. Includes a TLS from Alden Hopkins to Maupin Pence, 18 April 1959, discussing details of the construction, and a photocopy of TLS letter.