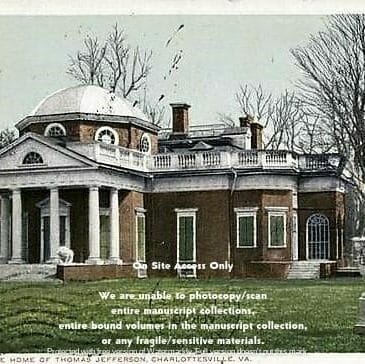 Biographical/Historical Information: James A. Bear, Jr. (1919-2013) was the first full-time curator of the Thomas Jefferson Foundation from 1955 to 1974. He was also the Resident Director from 1971 to 1984. During his time at Monticello, the house's dome and roof were restored, archaeological excavations began on the property, educational programs for guides were established, and other areas of the property were restored. Bear wrote numerous publications and research reports about Monticello, including Monticello's first guidebook.

Scope and Content: This is a typescript photocopy of an incomplete draft of "Monticello after 1826," by James A. Bear, Jr., relating the history of the house through the Randolph, Barclay, and Levy families the present owners, and The Thomas Jefferson Memorial Foundation. It contains many penciled editorial changes by Bear.