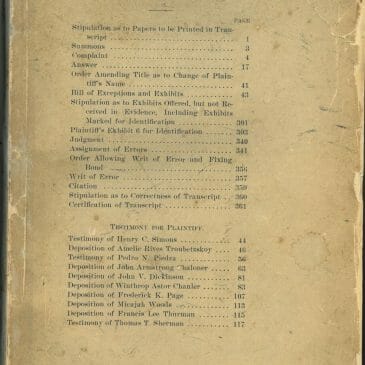 John Armstrong Chaloner (1862-1935) was born in New York and part of the elite society there. He married Amélie Louise Rives of Albemarle county in 1888. After their divorce he purchased the Merry Mills estate in Albemarle County. His phycological experiments and self-dubbed “X-faculty” landed him in the Bloomingdale Hospital in New York, where his family had him involuntarily committed. A New York court then  declared him insane. Soon after Chaloner escaped from the hospital. A Virginia court declared him sane, though he was still legally insane in New York. Chaloner began challenging New York’s lunacy laws, and his own verdict, in the courts.

Chaloner also published about two dozen books that focused on his experiences in Bloomingdale Hospital and his legal battles. In later years he sought to support the rural population in Albemarle County by opening a movie theatre at his estate and hosting fairs and other entertainments.

Chaloner died in 1935 at the University of Virginia Hospital. He was buried at Grace Episcopal Church in Keswick, Virginia.

Scope and Content: This is the published transcript of depositions and other court documents in the case of John Armstrong Chaloner, plaintiff, against Thomas T. Sherman, defendant, United States District Court, Southern District of New York.