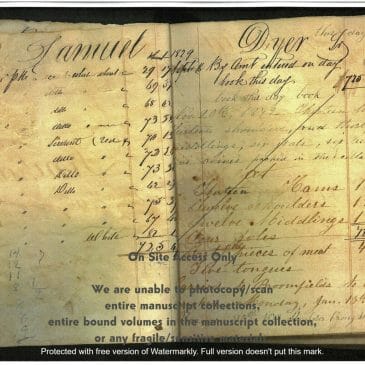 Access Restrictions: Researchers must use the photograph copies of the Moon ledger.

Scope and Content: The collection consists of documents and correspondence concerning Thomas H. Londeree's purchase of the Mt. Ayre estate. It includes the original deed to the property between Moon and Londeree, handdrawn surveys, information about the family cemetery, and written descriptions of the parcel's location. Also included are Fidelity Bank of Scottsville promissory notes, the estate inventory and appraisal of Thomas H. Londeree, and an Albemarle Home Mutual Fire Insurance assessment.

The Mt. Ayre plantation is on the Hardware River in southern Albemarle County, Virginia. John Digges Moon (1794-1862) bought the property from the Gilmer family in 1838. Moon’s grandson, Schuyler Barclay Moon (1867-1930) sold the property to Thomas H. Londeree in 1904. A family cemetery is located on the property and contains the graves of Moon and Gilmer family members, most notably that of early Albemarle County settler Christopher Hudson (1758-1825) and US Congressman Thomas Walker Gilmer (1802-1844). The home is no longer standing.