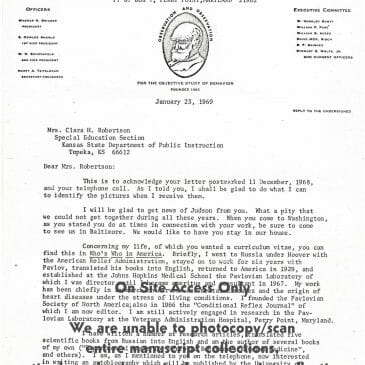 Biographical/Historical Information: William Andrew Horsley Gantt (1892-1980) was born in Wingina, Nelson County, Virginia, at his parent's home Rock Cliff. He attended the Miller School in Albemarle County, Virginia. After attending the University of North Carolina, he studied at the University of Virginia and received his M.D. in 1920. Afterward Gantt worked for the American Relief Administration in Petrograd, Russia, where he studied the health effects of famine and war. In Russia he was introduced to Ivan Pavlov. Gantt founded the Pavlovian Lab at Johns Hopkins University in 1929 and served as its director from 1930 to 1964. He also founded the Pavlovian Society in 1955 and was its president until 1965. He spent over fifty years of his career extending Pavlov's research on classical conditioning. At his death in 1980, he was one of only two surviving students of Ivan Pavlov. He was buried in the family cemetery at Rock Cliff.

Scope and Content: This is a photocopy of a TSL from W. Horsley Gantt to Clara Hamlett Robertson, 23 January 1969, giving his curriculum vitae and references to the Miller School, Albemarle County, Va. Letter was written on Pavlovian Society of North America letterhead.