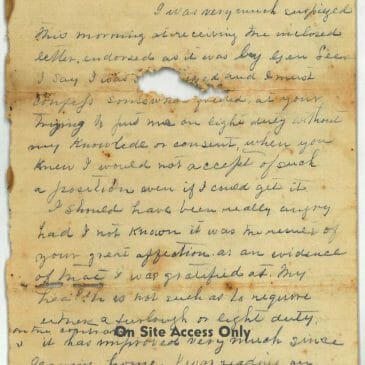 Biographical/Historical Information: John Richard Wingfield (1845-1931) was born in Albemarle County, Virginia, the son of Edward C. Wingfield (1820-1908) and Eliza M. Sims (1817-1896). He attended the Virginia Military Institute in July 1863, leaving in March 1864 to serve in the 2nd Virginia Cavalry during the Civil War. He was wounded on May 7, 1864 during the Battle of the Wilderness and did not rejoin his unit until February 1865. After the Civil War, he studied at the University of Virginia and earned his degree in law in June 1872. After practicing as an attorney, he entered politics in 1881, first elected to the Albemarle County Board of Supervisors, then to the Virginia Senate, where he served from 1881-1886. In 1886 President Grover Cleveland appointed him Consul to Costa Rica, a position he held until 1889. After his retirement, he concentrated his efforts on farming at his family's home at "Woodlands" on Route 676 and continued to be active in local politics.

This is a collection of three letters concerning J.R. Wingfield’s rejoining the 2nd Virginia Cavalry after his wounding and recovery.

3. J.R. Wingfield to Eliza M. Wingfield, 21 February 1865, admonishing his mother for attempting to get him assigned to light duty. Written from Camp 2nd Va. Cav.

All three letters are enclosed in glass. Transcriptions of the letters included.